This week you will read two stories from the Living Archive of Aboriginal Languages (you can always read more, but only some books on the site have audio recordings with them). 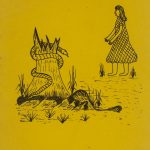 Note that ‘grandmother’ in English could refer to a few different people, but in Kunwinjku it refers to specifically to mother’s mother. 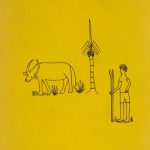 Note that in Kunwinjku there is a different term for a brother if he’s older or younger than the speaker.

In Unit 1 we read about Duruk kanan – “the dog sees” which was in present tense. Note the use of the 3sg pronominal prefix ka- on the verb nan.

Here we read about Kakkak nang where the verb nan (see) becomes nang in the past tense (saw). There are other verbs that change like this (like this one from unit 1):

Note also that in the past tense, the pronominal prefix 3sg is dropped (you don’t say *Kakkak kanang) – we’ll come across this again in later units.

The other book is also in the past tense, where wam (went) is the past tense form of re (go). This is an irregular form, and worth learning as it’s such a common verb.